“We thank President Trump for hosting this event to honor Greek Independence,” Larigakis said. “The event served to reaffirm the strong bonds of friendship between Greece and the United States, including Greece as a valued NATO ally; and to bring attention to the fact that this relationship is etched intrinsically by virtue of the noble democratic ideals and principles that guided our Founding Fathers in establishing our own country.” 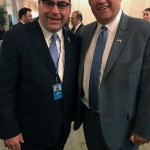 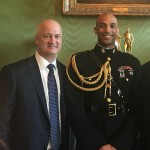 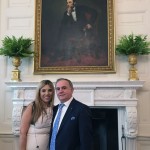 “As we celebrate let us be reminded that the freedom we enjoy today as a Greek nation came at a high cost of many generations,” he said. “Yet that freedom continues to be threatened to this day as recent developments in the Aegean continue to remind us. Therefore, let us all be more vigilant in the understanding of the issues that continue to threaten the peace and stability in the eastern Mediterranean and let’s redouble our efforts to advocate for these issues to U.S. policymakers.”

The American Hellenic Institute is a non-profit Greek American public policy center and think tank that works to strengthen relations between the United States and Greece and Cyprus, and within the Greek American community.